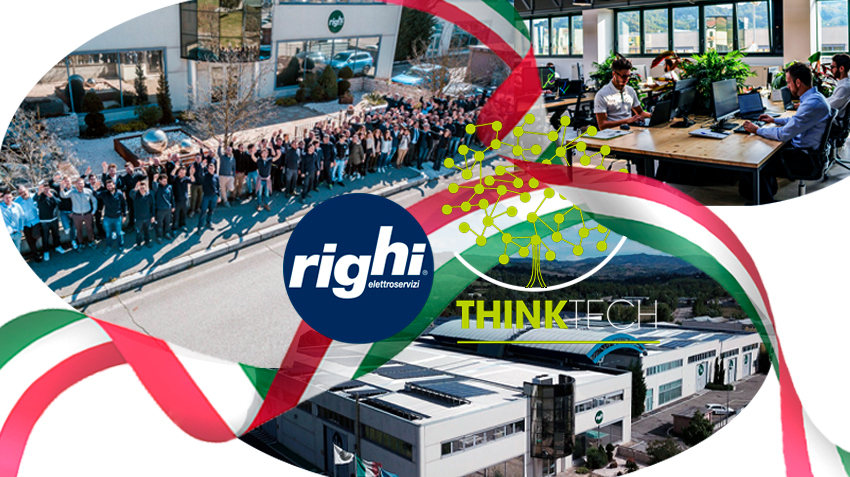 The company was founded in 1991 by Mauro Righi and his partner: Valentina Righi, Aldo Righi and Emiliano Negosanti.

Righi closed the 2020 with a strongly positive balance sheet and excellent prospects for future.

The turnover increased of 19% compared from the previous year, for a total of 42 Millions of Euro. A growth that indicates a clear strategy that aims to consolidate its leadership in the field of industrial automation, electrification and digitalization.

Strong R&D and logistic investments and more than 25 new hires are planned for 2021.

Righi Elettroservizi’s increase has been supported by the social responsibility of the company. “There is no successful company, which does not operate in successful territory. We have always pay attention to local initiatives” Said Mr. Mauro Righi, Managing Director of the company, in a video-interview for the 30th anniversary.

He underlines the strong relationship with the territory, that characterized Righi Elettroservizi. Actually, the company is part of different territorial association such as Romagna Solidale, Mecenati del Savio, Associazione imprenditori Vallesavio for voluntary activities. Furthermore, Righi has built strong relationship also with University and High Schools, for stage and orientation projects.

The human capital value is another key point of Righi’s company philosophy, the company guarantee a strong support to people employment.

The total of employees in Righi Elettroservizi is more than 200 people.

26 are the new technicians hired at Righi in 2020 and current year is seeing the same positive trend.

Since the beginning of the year there has been an increase in the resources employed, a consequence of the increase in incoming orders. Another 23 new hires will join the company by June.

2020 also saw an important expansion in terms of company surface.

In September has been inaugurated the new Competence Center, 800 square meters of office aimed at hosting the areas of research and development, remote control, software development and after-sales services.

The new building has been realized in a sustainable way, with innovative technology for the usage and production of renewable electrical energy.

The interiors of the Competence Center look to the future: an open space work area, with no assigned workstations and immersed in a green landscape.

The new office aims to the interaction between staff, flexibility and mental well-being during working hours.“Think Better, Do Better” is the motto written at the entrance to the building, which perfectly embodies the thinking followed by the company in recent years, summarized in the words of Mauro Righi: “Improve your knowledge and you will become more capable. Growing means innovating and knowing how to anticipate a market that is constantly evolving. We do not want to be “only” suppliers of our customers, but real partners and help them to achieve their goals”.

A lot of companies have chosen Righi Elettroservizi as technology partner, thanks to the expertise and professionally of its team. In the last past months, a lot of important projects has been closed. For example, the automation of the logistic process of the biggest warehouse of Netherlands, control system of one of the bigger GNL depot of Italy, command and control systems for a chemical production plant in India and much more…

In 2021 Righi Group has launched an important and interesting initiative: Righi Academy.

Righi Academy, with its slogan “Learning for future”, presents its self has a real training school with teachers specialized in the automation and plants sector.

Righi Academy was born for young passionate in the automation and plants sector and want to reverse the trend to the youth unemployment caused by the global pandemic.

The goal of the new Academy is not only to train resources in the technical field, but also to offer the most deserving students the opportunity to join the Righi Group with an employment contract.

The first courses about the software development will start in the coming months and new ones are planned for the autumn, also in the production field.